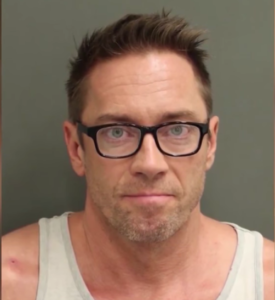 CBS presents ’48 Hours,’ an Emmy winning investigative newsmagazine, has an extensive archive of substantive crimes that have transpired all over the country. In one such episode, the homicide of a successful businesswoman named Shanti Cooper is discussed. In this article, we take a detailed look at the person who has been accused of the crime.

David Tronnes is an American suspect who is serving jail time in 2020 for the murder of his wife. He has been jailed in the homicide of American businesswoman, Shanti Cooper. CBS’s new TV show titled 48 Hours which is an Emmy Award-winning show has done extensive research and Shanti Cooper and David Tronnes.

Since the news of Shanti Cooper’s homicide can into public attention, people have been wondering where is David Tronnes in 2020. Well, he is in jail and is awaiting trial. He is serving jail time and does have a privilege for a bond.

David Tronnes grew up in Stillwater, Minnesota. His father was absent from his life, and his mother Beverly now lives in Orlando. David’s ex-wife, Carole Tronnes, who he married in 1999, described the mother as “mostly supportive but not always” during his younger years. Carole also told authorities that right out of college, David had joined the company 3M, and worked in sales, making $140,000. Then, he quit his position in 2008 because he was burned out, although some friends of the former couple claimed that he did so to control his sick ex-wife’s diet. Today, however, David Tronnes is the prime suspect and the one who has been accused of killing his second wife, Shanti Cooper, on April 24, 2018, in their Orlando residence.

It was around 3:51 pm that David made that 911 call—  “My wife. I found my wife, she’s not breathing. I tried to do CPR, I can’t get her to breathe.” Shanti was just 39 years old at the time of her demise. Her husband went with the cops willingly and even stayed at the Orlando Police Department headquarters for 14 hours without a lawyer. He claimed that he had gone to walk the dogs in the afternoon, and when he came back, he saw Shanti in the bathtub in her pajamas. He said, “I think something went wrong. Either she slipped and she fell or blacked out or something caused her to collapse.”

However, authorities quickly poked holes in his story. Detectives Teresa Sprague and Barb Sharp did not buy his version of the events. After all, post the examination of the crime scene, officials discovered that the bathtub was completely dry, and so was the floor around it. If David had indeed taken her to the bedroom from the tub, then water should have been everywhere. Detective Sprague also claimed that the amount of (dried) blood found on the bedroom floor was indicative of the body lying there for a while. In fact, the autopsy revealed that Shanti had died due to blunt force trauma and strangulation.

The couple had met on Match.com in 2013, and after an online romance, they got married in 2017. Before that, David came to Flordia to live with Shanti and her son. They bought a house on East Copeland Drive in April 2015. During their courtship, David had told Shanti that he was a rich man who had inherited $4-6 million after his father’s death (but this was later proved to be a lie). She paid for everything, and authorities believe that there is a financial motive behind the homicide. Another possible incentive was that Shanti had learned about her husband’s sexual affairs at the same-sex bathhouses.

David had bought the 400 square feet property for around $600,000 in cash, which he had put in a trust with his mother. Even after marrying Shanti, he excluded her from the property’s deed. The Victorian-style house, while certainly massive, lacked functionality. So the couple got started on renovations, which would cost the wife around a quarter-million dollars. During an interrogation with the cops, he revealed that he was sleeping on the couch whereas his wife had inhabited the apartment above the garage during the course of the renovations.

Authorities believe that the night before the 911 call, David had already killed Shanti. Detective Sprague believed that the wife had been attacked as she was getting ready for bed. She wrote in her report, “It seemed plausible to me she had placed her cell phone on the nightstand and started to remove her jewelry, including her watch and one earring, and was in the process of removing her left earring when she was attacked.” She also felt that David had cleaned up after himself, hence leading to the conflict between the actual evidence versus his narrative. Court documents showed that David had moved Shanti’s money around, and had even paid his lawyers $252,000 from her account.

In fact, Detective Sprague also noticed his lack of remorse during the interrogation and made some pertinent notes. In one such entry, she wrote that he had only fake-cried the whole time, and tears had not been shed even after two hours. She also noted, “We suggested the way he described the relationship, it almost sounded as if he was like the help, the pool guy and the lawn guy. I advised him perhaps she called him a name, belittled him in some way, or made him feel less than a man. His response was he “smirked and almost smiled.”

Where is David Tronnes Today?

51-year-old David was arrested for first-degree murder and is currently awaiting trial. He is being held at the Orange County Jail without a bond. He has always maintained his innocence and will fight the case with the legal help of a public defender. Previously, his defense attorney, Richard Zaleski, had stated that the detectives were trying to build a case against his client based on a preconceived notion.

An inmate at the jail where Tronnes is being held said that Shanti had discovered Tronnes’ secret life and had wanted a divorce. The informant also explained how Tronnes claimed that he had blacked out moments before supposedly and accidentally killing his wife. The informant also said, “He said, ‘I’m in here for murder, but I’m not a murderer.”

The police were also investigating another angle against the accused, that of poisoning both his wives. Back when he was still married to Carole, her health deteriorated, and police felt that it was possible that David could have been poisoning her. After all, Shanti also had many of the same symptoms as Carole. The latter, however, stated that her illness persisted even after their divorce so this scenario wouldn’t be possible. The informant also told authorities that Troness had mentioned Kambo, a poisonous secretion from an Amazonian giant monkey frog, that doesn’t show up on a toxicology report.