New York attorney general says Trump has PAID $110,000 after he was fined $10,000 a day for refusing to hand over documents -but is still yet to comply with all of the order

Donald Trump has paid the $110,000 he owed but produced only part of the documentation necessary to lift the order holding him in contempt of court just ahead of a Friday deadline, a spokesperson for the New York attorney general said.

Trump was slapped with a $10,000 per day fine last month as part of a contempt order for his lack of cooperation with Letitia James’ probe into the finances of the Trump Organization. Judge Arthur Engeron said at the time it was not clear Trump had conducted adequate searches for the documents requested, after his attorneys said they no longer had them.

Engeron ruled that in order to lift the contempt finding, Trump needed to pay the fine. He also needed to allow third-party firm Haystack to conduct a review of the Trump Org’s records for relevant documents and that Trump employees needed to submit affidavits of the organization’s document retention and destruction policy.

The Haystack review is complete and responsive documents have been handed over but Trump still has yet to comply with the third condition as of Friday afternoon, the spokesperson said.

James has said her investigation has found evidence that the Trump Org devalued its assets, including hotels, golf courses and other real estate, for tax purposes but inflated their value in order to get favorable loans.

Trump has already appealed the contempt order and the fine will be placed in an escrow account until his appeal is decided.

NY attorney general Letitia James has questioned how the Trump Organization valued the Trump brand, as well as properties including golf clubs in New York and Scotland and Trump’s own penthouse apartment in midtown Manhattan’s Trump Tower 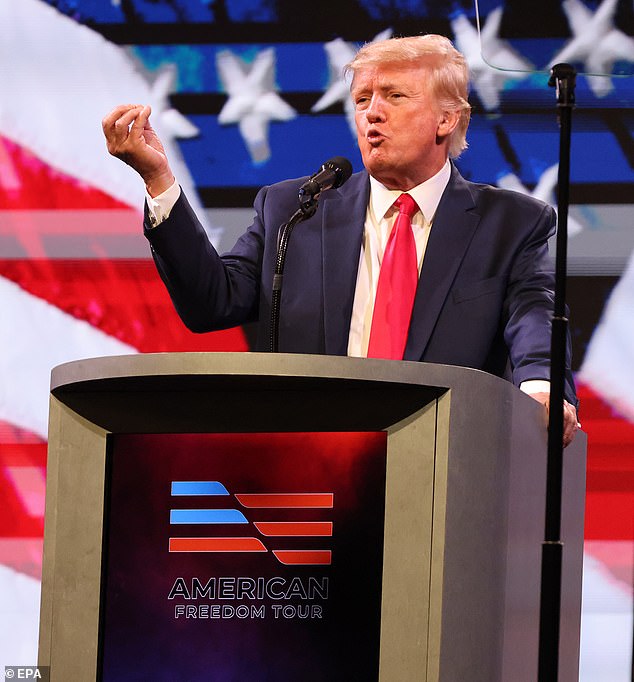 Donald Trump has paid the $110,000 he owed but produced only part of the documentation necessary to lift the order holding him in contempt of court just ahead of a Friday deadline

The attorney general has questioned how the Trump Organization valued the Trump brand, as well as properties including golf clubs in New York and Scotland and Trump’s own penthouse apartment in midtown Manhattan’s Trump Tower.

She also accused the ex-president of missing a mutually agreed-upon deadline to hand over eight personal financial documents — which Trump’s attorneys claim he simply does not have.

James sought the order with the $10,000 a day fine after Trump failed to meet a March 31 deadline to comply with a subpoena.

Trump has repeatedly denounced James’ probe as a ‘witch hunt’ and accused her of acting out of political bias.

She subpoenaed him and two of his adult children, Ivanka Trump and Donald Trump Jr., in December. James has been seeking a deposition from all three.

The ex-president’s third-eldest child Eric Trump was questioned by James in fall of 2020.

Trump attorney Alina Habba called James’ contempt request a ‘publicity stunt’ in an April 20 filing and claimed the onus was on his family business to produce the documents.

After a ‘dutiful search’ for what prosecutors were seeking, Habba said he ‘simply did not have any of the requested documents in his personal possession or custody.’

Instead, she claimed ‘all potentially responsive documents were in the possession, custody or control of the Trump Organization.’

She pointed out her client ‘was not obligated to produce documents’ in the company’s control.

‘He’s Donald Trump, the most famous real estate developer in the world, arguably,’ the judge said. ‘I am surprised he doesn’t seem to have any documents; they’re all with the organization.’

Trump had signed a sworn affidavit that he didn’t believe he had any relevant documents.