Donald Trump called the surging migration crisis at the southern border an ‘invasion’ during a rally in Georgia on Saturday as he left 13 seats empty for the U.S. service members who died in an ISI-K suicide bombing during the withdrawal from Afghanistan last month.

The former president invited up on stage the Marine who was pictured helping lift a baby over the airport wall in Kabul. Lance Corporal Hunter Clark, who is from Georgia, said it was ‘one of the greatest things I’ve done in my entire life.’

The image went viral of Clark hoisting a baby from the arms of an Afghan citizens over the airport wall during the chaotic withdrawal in August. He was visibly emotion when expressing his thankfulness to be home now – in an apparent nod to the 13 service members who didn’t make it.

Trump slammed President Joe Biden for the bungled withdrawal, which was widely criticized by Democrats and Republicans. He said due to a lack of vetting and planning, the administration is now allowing Afghan criminals and potential terrorists into the U.S.

‘They’re emptying their prisons into our country. We have people coming into our country who we do not want,’ Trump said of Afghanistan and Central and South American countries.

Donald Trump called the surging migration crisis at the southern border an ‘invasion’ during a rally in Georgia on Saturday as he left 13 seats empty for the U.S. service members who died in an ISI-K suicide bombing during the withdrawal from Afghanistan last month

He was also referencing the recent surge of 15,000 mostly Haitian migrants to a makeshift encampment under and around the Del Rio International Bridge in Texas.

‘This is an invasion!’ Trump yelled, which prompted ‘build the wall’ chants.

Trump claimed that Biden ‘could finish that wall in one month’ if he wanted.

The former president’s supporters didn’t take waste time breaking out into ‘F*** you Biden’ chants immediately as they entered the rally venue at the Georgia National Fairgrounds and Agricenter on Saturday afternoon.

Earlier on Saturday, a crop plane with a banner reading ‘Tax the Rich’ along with President Joe Biden‘s slogan ‘Build Back Better’ circled the rally venue at the Georgia National Fairgrounds and Agricenter on Saturday afternoon.

Trump is coming to the center of the Peach State on Saturday to hold a rally for lieutenant governor candidate and current Georgia state senator Burt Jones, Secretary of State Candidate and current US Representative Jody Hice and Senate candidate Herschel Walker, all of whom delivered speech teeing up the main act.

‘People always ask what qualifies me to run to this office,’ Walker said in his speech.

He answered: ‘Well, I’m an American.’ 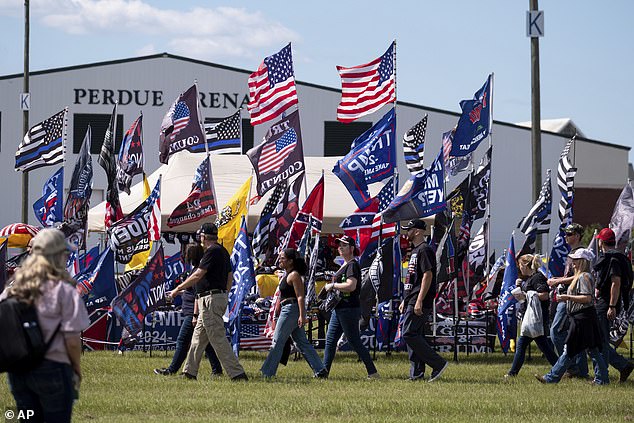 Thousands of Donald Trump supporters arrived at the Georgia rally 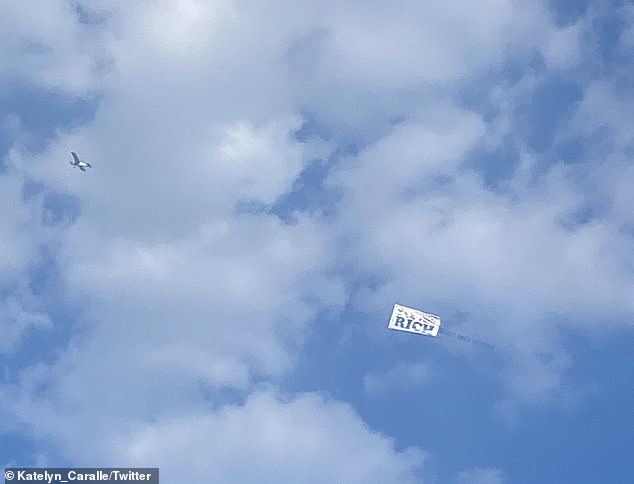 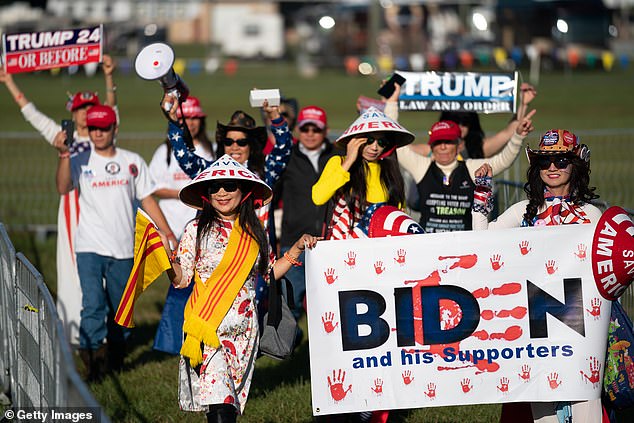 Greene, who represents George is 14 congressional district and the Northwestern-est corner of the state, was given a very warm welcome from the pro-Trump crowd.

She walked around with an ‘impeach Biden’ sign in her right hand and shook peoples hands with her last before the rally started. Shortly after, Greene took stage with her sign — prompting a chant of the same words.

The congresswoman also further promoted The claim of the 2020 presidential election was stolen saying: ‘If the people of Georgia won an audit, then they should have an audit.’

The fired up crowd continue to call for an audit throughout the night, repeatedly chanting ‘audit’ and cheering the loudest when the speaker would mention it.

‘We’ve got to get election integrity back in our system,’ said Jones, Who is running to be the next lieutenant governor in Georgia.

‘If I have anything to do with it, we’re going to get rid of those voting machines because people don’t trust them — just that simple,’ Jones said of the Dominion voting machines, which some conservative theories suggest for part of a planned fraud effort to rig the election for Biden.

He added: ‘When people don’t trust them they won’t show up to vote.’ 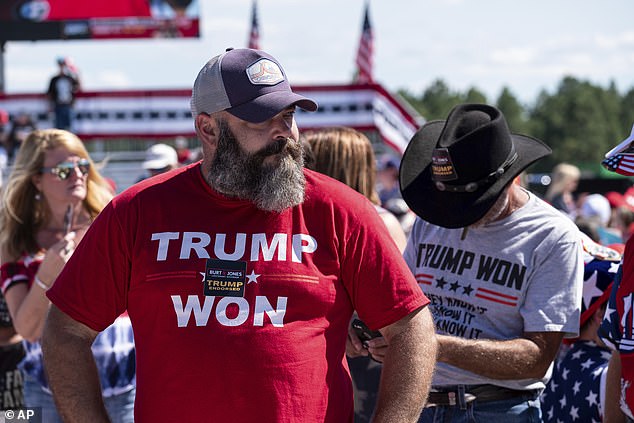 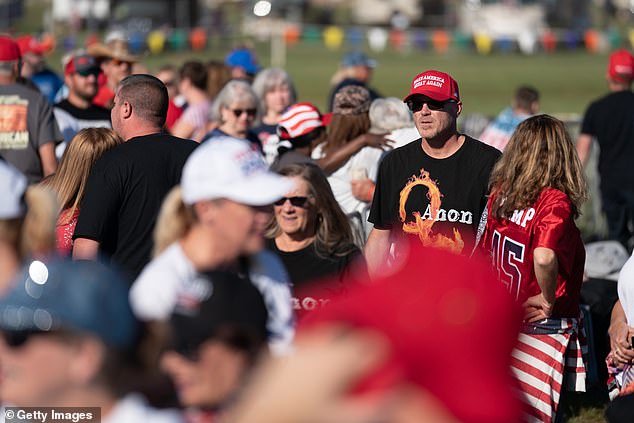 Thousands of supporters gathered hours before doors opened around 2:00pm 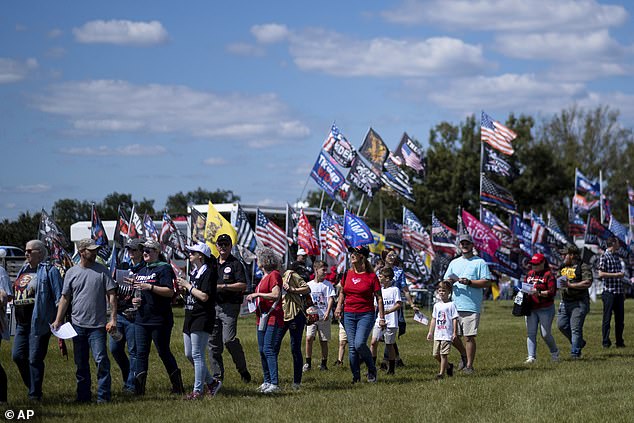 Outside of the rally venue, vendors set up food and booths supporting various causes and Republican candidates

Representative Hice, Who is running to take Secretary of State Brad Raffensperger’s seat, played up to the lack of investigation into the election results spike amounts from the former administration Republicans in Georgia.

‘It is Time to give Brad the bill and send him home,’ Hice said two massive cheers and another ‘Audi’ chant.

‘We or a country that works upon the consent of the governed,’ he continued. ‘Brad Raffensperger has massively compromised at the right of the people at the ballot box. He has opened wide the door for all sort of irregularities and fraud to march into our election.’

‘We’ve got to restore election integrity in this state that Brad Raffensperger has destroyed.’

Georgia is a key swing state that barely went blue in the 2020 presidential election with Joe Biden winning by less than 0.3 per cent by earning 49.47 per cent of the vote to Trump’s 49.24 per cent.

Attendees at Trump’s rally on Saturday, however, believe the former president’s claims that the election was ‘stolen’ and that there was widespread cheating by Democrats through the use of expanded mail-in voting at the height of the coronavirus pandemic.

While the hundreds of individual and bleacher seats filled up quickly, thousands more supporters were able to fill in the standing area in the fenced-in field on the 1,100+ acres of land on the Fairgrounds.

The rally comes a few weeks after Trump sent out his official endorsement of Walker in his Senate candidacy.

‘Herschel Walker is a friend, a Patriot, and an outstanding American who is going to be a GREAT United States Senator,’ Trump said in a September 2 statement. ‘He embodies ‘America First’ and the winning spirit of Georgia.’

‘Herschel is tough on Crime and Borders, and he will always stand in support of Law Enforcement, Military, and our Vets. He will fight hard for our Second Amendment and Voter Integrity,’ he added.

‘Herschel Walker will never let you down. He was a great football player and will be an even better U.S. Senator—if that is even possible. He has my Complete and Total Endorsement!’

Thousands of supporters gathered hours before doors opened around 2:00pm.

Outside of the rally venue, vendors set up food and booths supporting various causes and Republican candidates – including for Walker, Secretary of State candidate current Georgia Representative Jody Hice, and State Senator Burt Jones, who is running for Georgia Lieutenant Governor.

Walker is a former professional football player and 1982 Heisman Trophy winner who spent his college career at the University of Georgia and is beloved in the state. He is running in the midterm primary election – with the backing of Trump – to take on Democratic Senator Raphael Warnock in the 2022 elections.

Warnock won a special election in a 2020 runoff with incumbent Kelly Loeffler and just assumed office in January 2021.

In a drawing sent out from Trump’s Save America political action committee ahead of the rally, supporters could enter a raffle to win a football signed by Trump and Walker.

Trump endorsed Hice back in March as he is not running for reelection in the House and instead vying to take on current Georgia Secretary of State Brad Raffensperger, a fellow Republican who has fallen out of favor with Trump when he refused to pursue election fraud claims.

‘Wow, just heard the good news. One of our most outstanding Congressmen, Jody Hice, has announced he is running for Secretary of State in the Great State of Georgia,’ Trump sent out in a statement in March.

‘Jody has been a steadfast fighter for conservative Georgia values and is a staunch ally of the America First agenda. Unlike the current Georgia Secretary of State, Jody leads out front with integrity. I have 100% confidence in Jody to fight for Free, Fair, and Secure Elections in Georgia, in line with our beloved U.S. Constitution.’

He added: ‘Jody will stop the Fraud and get honesty into our Elections! Jody loves the people of Georgia, and has my Complete and Total Endorsement.’

Donald Trump has said that only grave health concerns could prevent him seeking the White House once again in 2024, in another sign that the Republican’s next US presidential bid may be inevitable.

Trump made the remark in a phone interview on Friday night, ahead of his planned rally in Perry, Georgia on Saturday to support his picks in key Republican primary races.

Asked by Real America’s Voice host David Brody what might prevent him from running again, Trump responded: ‘Well, I don’t — I guess a bad call from a doctor or something, right?’

‘Things happen. Through God, they happen,’ he added. ‘But I feel so good.’

Trump, a hugely polarizing figure who was twice impeached while in office, has made little secret of his ambitions to re-take the White House.

But has avoided declaring his candidacy outright, likely on the principal that it is best to be an official candidate for as short a time as possible.

His grip on the Republican party remains firm, as he hopes to show at Saturday’s rally, where he will back three candidates seeking the party’s nominations.

Trump vowed that the rally would be ‘epic’ in a fundraising email to supporters this week writing that: ‘Georgia is critical to our efforts to take back the House and Senate in 2022, and then the White House in 2024, which is why this rally is so important to me.’

14 Mexican soldiers crossed into US; 1 had marijuana

Steele defends explosive claims about Russian collusion from his dossier