Joe Biden will give the commencement address at the U.S. Naval Academy on Friday while Donald Trump will speak to the National Rifle Association in dueling appearances that could preview the 2024 president campaign.

Trump will be in Houston, just a few hours from the site of the mass shooting at Robb Elementary School in Uvalde, Texas, where Biden and first lady Jill Biden will head to on Sunday to meet with family members of the 21 victims.

Biden will also give another commencement address – this one on Saturday at the University of Delaware, his alma mater.

Trump, meanwhile, will be in Wyoming on Saturday to headline a political rally for the primary rival to Republican Rep. Liz Cheney, whom he has vowed to defeat after she voted to impeach him for his role in the January 6th insurrection.

The starkly contrasting schedules of the two men speak volumes about their personal convictions and this weekend’s events could serve as a preview of a 2024 rematch should Trump decide to make another run for the Oval Office. 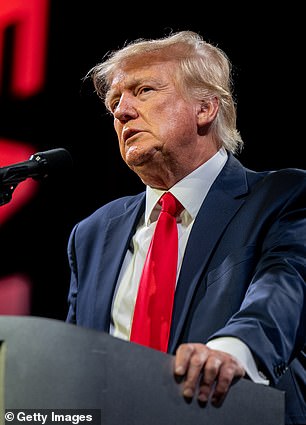 Joe Biden will give the commencement address at the U.S. Naval Academy on Friday while Donald Trump will speak to the National Rifle Association in dueling appearances that could preview the 2024 president campaign

This weekend, Biden will showcase his strengths as sympathizer-in-chief, a role he demonstrated during the 2020 presidential campaign, both during the covid pandemic and during the racial protests that sprung up around the nation after the death of George Floyd, a black Minnesota man murdered by a white police officer.

Trump, in contrast, struck an aggressive posture during those protests when, as president, he ordered Lafayette Square cleared of black rights protesters so he could walk to St. John’s church for a photo op.

the former president’s speech on Friday afternoon, taking place less than 300 miles from the site of the Uvalde shooting, will be closely watched for the tone he sets. He is expected to defend gun rights, which was his stance in the last presidential campaign and one of importance to his MAGA supporters.

In a statement, Trump saidhe was speaking to the convention because the country needs ‘real solutions and real leadership in this moment.’

Trump, who still falsely claims he won the 2020 election, has given no hint as to whether he will run again but repeatedly dangles the possiblity to his supporters. His political shadow looms over that race and the upcoming midterm election in November.

During his presidency, Trump dealt with a mass shooting at Marjory Stoneman Douglas High School in Parkland, Florida, that resulted in 17 deaths.

In the aftermath, he suggested he would have run into the school ‘even if I didn’t have a weapon’ and slammed the FBI for missing ‘all of the many signals sent out’ by the shooter.

In contrast, Biden has called for stricter gun laws in the wake of Uvalde shooting. And he spoke directly to parents about their loss. The president, who has buried two children, said the death of a child is a loss to the soul.

While mourners gather in Uvalde, protesters are expected in Houston, where some headline speakers have decided not to attend the NRA annual meeting. About 70,000 NRA members are expected to attendover the three days.

Texas Gov. Greg Abbott, a Trump ally, ditched plans to speak at the convention in order to be in Uvalde. He will send video taped remarks instead.

But Republican Senator Ted Cruz of Texas will be there. As will South Dakota Gov. Kristi Noem.

Two top entertainers, however, decided not to attend.

Lee Greenwood, whose song ‘God Bless the USA’ has long been Trump’s walk-on music for his rallies, said he and his band decided to cancel ‘out of respect for those mourning the loss of those innocent children and teachers in Uvalde.’ 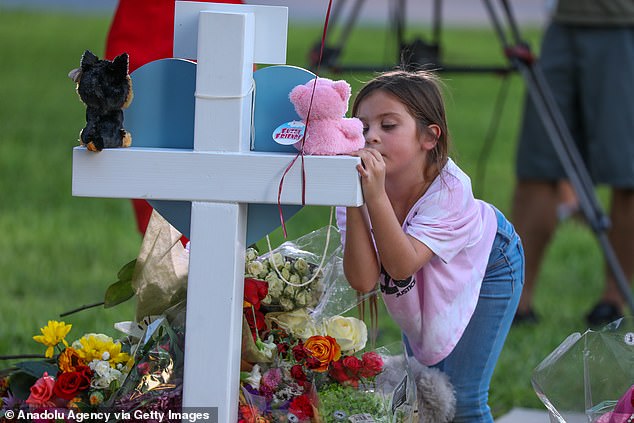 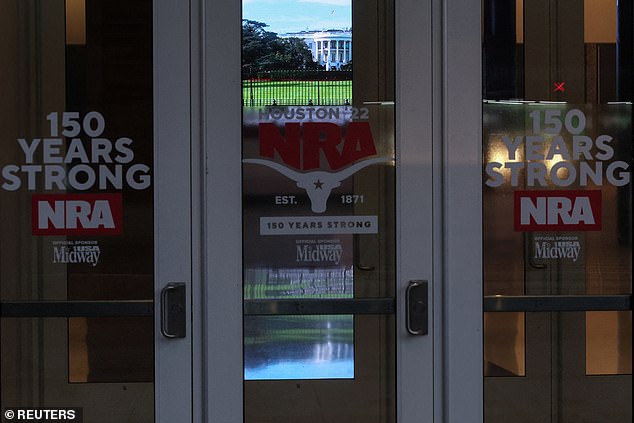 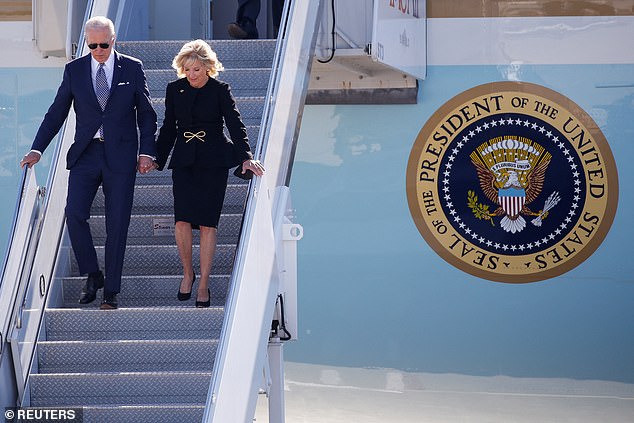 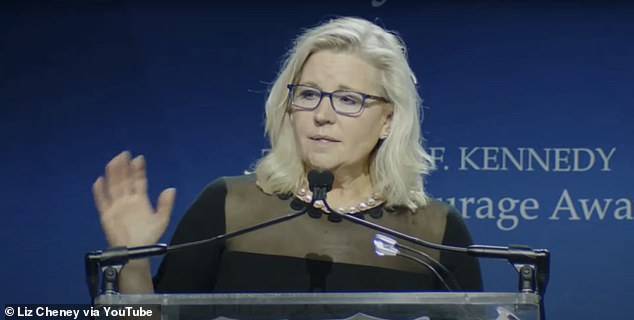 Donald Trump will speak at a political rally in Wyoming on Saturday as he tries to defeat Republican Rep. Liz Cheney (above)

Guns will not be allowed in the convention center during Trump’s speech because of Secret Service security requirements, according to the NRA’s website.

‘Firearms, firearm accessories, knives, and other items WILL NOT BE PERMITTED in the General Assembly Hall,’ the website notes and adds the Secret Service will set up magnetometers to screen people.

Some Democrats and anti-gun groups urged the group to postpone the event after the Robb Elementary School shooting.

But the NRA is going forward and said it remains committed to school safety, a response similar to ones given after other school shootings.

‘As we gather in Houston, we will reflect on these events, pray for the victims, recognize our patriotic members, and pledge to redouble our commitment to making our schools secure,’ the group said in a statement.

Black Lives Matter: Houston and the gun safety group Moms Demand Action are among those planning to protest outside the convention center.

Johnny Depp’s Attorney Tells Jury In Closing Arguments: “There Is A Victim Of Domestic Abuse In This Courtroom, And It Is Not Miss Heard” 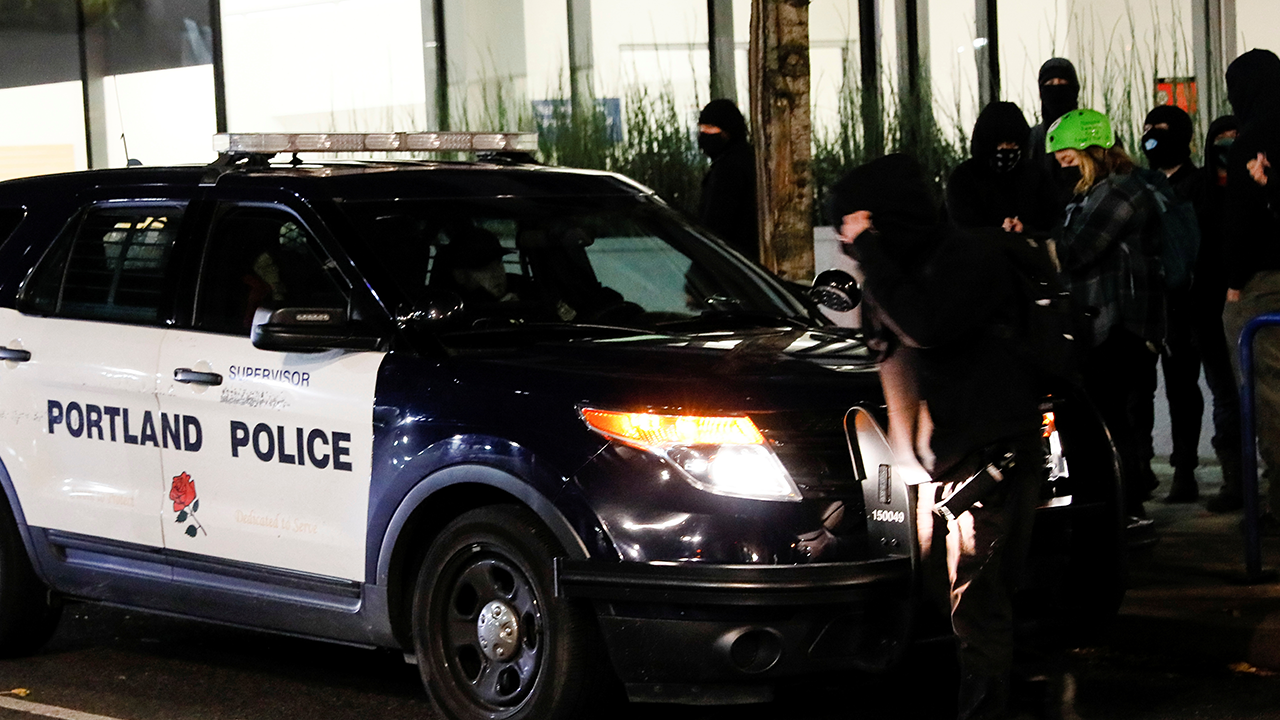