Republican Arkansas Gov. Asa Hutchinson said Friday that he would not be backing former President Donald Trump if he runs for the White House again over his false election fraud claims and behavior on January 6.

He also said he would not sign legislation banning women from traveling to other states to get an abortion, but said he supports Arkansas’ trigger law preventing most terminations which came into effect after the Supreme Court overturned Roe v. Wade.

Hutchinson, who has said he might jump into the 2024 race, reiterated that position Friday because Trump ‘disqualified himself, in my judgement, from his actions on January 6 and leading up to that.’

‘I want to be a voice for common sense conservatism, and we’ll see how that resonates, but let’s get through 2022, we have a very important election ahead,’ Hutchinson said, adding he wouldn’t make a decision about 2024 until after the midterms.

Hutchinson signed Arkansas’ law that bans abortions unless a mother’s life is at risk in 2019. State senators have now suggested submitting bills banning women from travelling out of state to get the procedure, but Hutchison insisted he wouldn’t sign them.

He said it would be a ‘violation of interstate commerce’ and Arkansas had already decided how it wanted to handle the issue.

Republican Arkansas Gov. Asa Hutchinson said Friday that he would not be backing former President Donald Trump if he runs for the White House again over his false election fraud claims and behavior on January 6

‘Anyone who appreciates the difficulty of someone being 25 and thrust into that incredible closeness to history and what even in her young age understood to be fundamentally wrong and she testified to it,’ Hutchinson said. ‘So my heart goes out to those that really stood firm during that time.’

‘And I think she clearly demonstrated her concern and her love for our country,’ the governor added.

‘I did, she came across with a great deal of credibility,’ the Republican office-holder said.

But Hutchinson also offered that because there’s no cross-examination of witnesses it leaves the door open to credibility issues.

He also noted that ‘they got into here say.’

‘If they can’t back that up it undermines that testimony,’ he pointed out.

The younger Hutchinson testified that she was told about Trump’s behavior in the presidential SUV departing the Ellipse rally on January 6, including that he lunged at the steering wheel, when told Secret Service would not take him to the Capitol Building to join his supporters.

Since her Tuesday appearance, both the Associated Press and The New York Times reported that both Bobby Engel, Trump’s head of security who Hutchinson said was present, and the driver are prepared to testify that Trump never lunged for the steering wheel.

Gov. Hutchinson was also dubious that the January 6 committee had proven there was criminal conduct.

‘I question whether they have made that case, I don’t believe they have, I don’t know if they can. But the Justice Department is watching that and we’ll see how that develops,’ the Arkansas governor said. 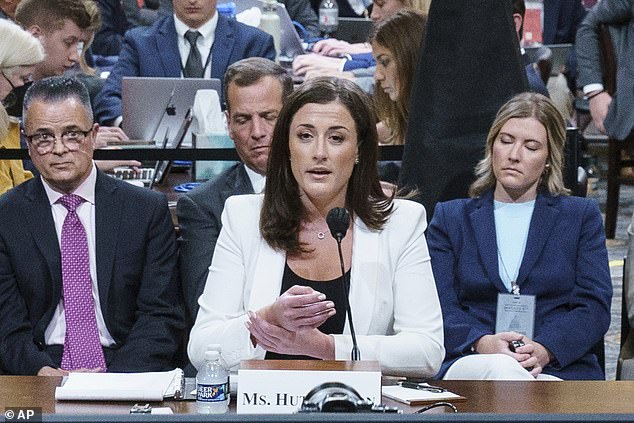